It is not strange to see a play casting both foreign and Chinese actors; but what if the lines are spoken in Norwegian one moment and in Chinese the next? 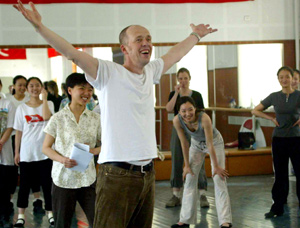 The 46-year-old Norwegian director Lars Vik has worked on the co-production of Ibsen's 'Peer Gynt' for two weeks and in a one-week pre-workshop in China in February. Beijing's theatre-goers will soon see the result of his effort.

Staged at Tianqiao Theatre from April 30 to May 3, 'Peer Gynt' will be presented during the 2004 Beijing International Drama Festival which runs from April 26 to May 31.

The co-production by Teater Ibsen from Norway and Beijing Song and Dance Theatre will also mark the 50th anniversary of the establishment of diplomatic relations between China and Norway.

Director, actor and playwright, Vik is one of the founding members of Grenland Friteater, a well reputed Norwegian independent theatre company.

He is permanently touring his one-man-show 'Fritjof Fomlesen' throughout the world.

That version included 15 professional actors, eight musicians, 40 amateur extras and a whole bunch of technicians. The performance took six hours, and took both casts and audience by bus to three different performing areas and included a full meal.

The story is about Peer Gynt, son of the once rich and highly regarded Jon Gynt, who becomes a drunkard and loses all his money, leaving Peer and his mother to live in poverty.

Peer wants to restore what his father wrecked, but gets lost in boasting and day-dreams.

He gets in a fight and carries off bride Ingrid Hegstad on her wedding day. He flees from the parish.

During his flight he meets three amorous dairy-maids, the woman clad in green, the daughter of the old man of the Dovre mountains, whom he wants to marry, and Boyg, the great obstacle.

Solveig, whom Peer met at the Hegstad wedding, and fell in love with, comes to his cabin in the forest to live with him, but he leaves her and goes on his travels.

He is away for many years, takes part in various occupations and plays various roles including that of a shady businessman on the coast of Morocco, wanders through the desert, passes the Memnon and the Sphinx, becomes a Bedouin chief and a prophet, tries to seduce Anitra, daughter of a Bedouin, and ends up as a guest of a madhouse in Cairo, where he is hailed as emperor.

When at last on his way home as an old man, he is shipwrecked. Among those on board is the Strange Passenger, who wants to make use of his corpse to find out where dreams hide.

Back home in the parish, he attends a peasant funeral and an auction where he offers for sale everything from his earlier life.

He also meets the Button-moulder, who maintains that Peer's soul must be melted down with other faulty goods unless he can explain when and where in life he has been 'himself,' and the Lean one, who believes he cannot be accounted a real sinner who can be sent to hell.

Peer, in ever greater despair, reaches Solveig, who has been waiting for him in the cabin ever since he left. She tells him that he has always been himself in her belief, hope and love.

'It's a story about travel, escape, confrontation. It's about the search for the meaning of life, but it is also a love story, I think. It's inspiring and challenging - to present this great Norwegian national anthem to the Chinese audience,' said Vik.

'For me it is Ibsen's richest, most exciting work. It is full of practical craziness, great humour and yet quite serious. And it is so visual and sensual, dynamic and beautiful. Yes, all of it. What more can a director ask for?'

He said before he directed the all-Norway version last year, he read the text over and over again; studied a few other adaptations; watched a NRK TV version a few times and took a trip to a little village in the mountains where 'Peer Gynt' is performed every year.

'It can be inspiring to see how others have attacked the text, not least of all to imagine how oneself would do things differently,' he said.

He emphasizes: 'Gynt is an enormous text. I have deleted some, especially towards the end, but my starting point was that the whole work should be included. All scenes, all characters, everything that is vital to the text.'

And Vik deals with the play in his own way.

He said: 'I tried to treat the text as a new one, in other words as a completely fresh, virgin work which was written by a contemporary Norwegian playwright. I even wrote a dramatic outline. The thought in the back of my head was of course to get rid of everything that connects itself to such a known work.'

As for the Beijing version, Vik said, it is something different from the Norwegian version, but at the same time its very similar.

'I have cut some text and dropped a few minor scenes, but the whole story is there. All the characters, all the ideas, the poetry and the humour. I hope.'

Vik has shortened it to a 12-scene play about 135 minutes including the intermission.

And Scene Eight takes place in an international bar in China where Peer appears as a successful businessman engaged in shady business, entertaining his European friends, many years after he left his country.

Concerning the language barrier, more long obscure lines have been cut and the performers will interpret these with impressive body language.

In addition, a Chinese actor and an actress speaking lines in Chinese can help the local audience understand the play better.

More helpful for the Chinese audience are the two Solveig Gynts.

Geddy Aniksdal is the Norwegian Solveig and Yan Qinyu is the Chinese. They shuttle in every scene and speak Norwegian and Chinese respectively.

Zhao Junbo, 22, junior student from China Central Academy of Drama, performs quite a few roles in the play.

At first, he was assigned to act as a troll in the Dovre Mountain and an interpreter in the international bar. As the rehearsal went on, his performance impressed Vik who gave him more roles with lines.

'For me it's a great challenge to incorporate the Chinese cast in the production in a smooth way. I was a bit unsure myself. But it has gone beyond all expectations. Zhao merges himself into the play well and if he speaks more Chinese as different roles, although most of them do not show up on stage, it could help the audience catch what's going on the stage easily,' said Vik.

'In some parts, I speak as the interpreter of a certain actor. That means he has to stop one action, waiting for me to repeat what he has said in Chinese, then makes the next action. It's not easy for the actor to keep a certain breath in a play,' he said.

Besides Yan and Zhao, there are 28 dancers and a band from Beijing Song and Dance Theatre and two acrobats, one 8-year-old and the other 18-year-old will perform in the play.

Un-Magritt Nordseth, choreographer of the play, said: 'These Chinese dancers have high techniques. They are positive, generous and very quick to learn everything.

'It probably is due to a fortunate mix of good planning, dual sided respect, good chemistry, co- operation on all levels and perhaps most important of all, an unbreakable desire to accomplish this as a partnership. A kind of professional, voluntary, communal work,' she said.